In the coming years, further systems will be added:

At present, these systems are not linked and must be consulted separately. In future, an IT solution known as interoperability will ensure their interconnectivity.

Cross-referencing crucial information at the click of a mouse: that is the aim of interoperability. It will allow police forces, border guard authorities and migration services to access the right information at the right time, providing them with a comprehensive picture of the person under scrutiny. This will allow the authorities to identify more effectively any person who poses a threat to security or who is hiding their real identity. 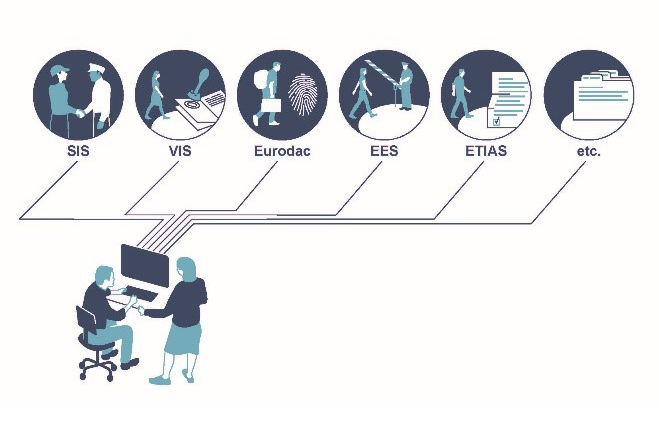 Without interoperability (current situation), each system must be consulted separately. 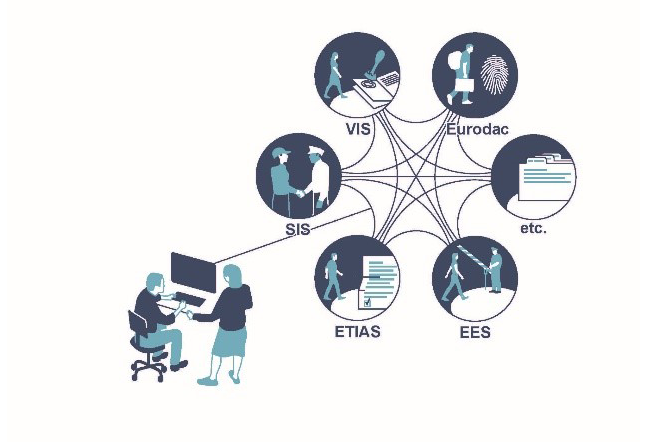 Thanks to interoperability, authorities will be able to access the relevant information in all systems.

Access rights to the information systems will not change, but interoperability will substantially enhance security thanks to more effective controls at the borders and by the police. It will facilitate the fight against terrorism and crime, and help prevent irregular migration.

Alexandre B. is currently in Switzerland. He commits several offences in a number of cantons. His criminal record includes drug dealing. He is deported to Nigeria, his country of origin. Switzerland registers an entry ban against Alexandre B. in the Schengen Information System (SIS).

A few weeks later, an individual by the name of Robert T. applies for a Schengen visa at the Finnish embassy in Nigeria. Robert T’s fingerprints are entered in the Visa Information System (VIS). He gets the green light! Robert T. flies to Finland with a valid Schengen visa and is now able to move freely around the Schengen area.

Robert T. or Alexandre B.? It is the same man. At present, he is able to slip through the net with a false identity because the information systems are not connected.

In future, thanks to interoperability, a single portal will search all the European databases (SIS, VIS, Eurodac, ETIAS, EES, ECRIS-TCN, etc.). All the systems will be interconnected and will communicate with each other. Police forces, border guard authorities and migration services will receive the relevant information directly, depending on their access rights, or they will be informed if the system turns up a match, enabling them to request the relevant information directly from the competent authority.

Today, when Switzerland enters a criminal with an entry ban in the Schengen Information System (SIS) and returns that person to their country of origin, they can still return to the Schengen area. How is that possible? The person can request a visa from the embassy of another country under a false identity. When their digital fingerprints are entered in the VIS database, they are not checked against the SIS database. However, in future a common search portal ‒ the European Search Portal ‒ will run simultaneous checks in all information systems, including the SIS and VIS databases.

When a person is checked, their biometric data will be compared with data in other information systems. It will therefore become possible to identify individuals who are registered in different databases under false or multiple identities.

Interoperability will improve security thanks to better controls at the borders and by the police. It will facilitate the fight against terrorism and crime, and help prevent irregular migration.